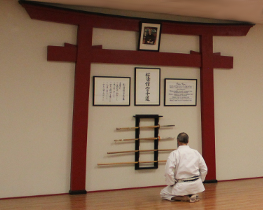 Nevada Shotokan Karate-Do (NSK) was founded by Sensei Clark in 2001 after retiring from the Air Force. NSK offers Japanese Karate Association (JKA) style training in traditional Japanese Karate. NSK is a family oriented dojo that offers serious students rigorous physical and mental training in the art of Karate. Emphasis is on the traditional aspects of Shotokan, not sports Karate.

"The ultimate aim of the art of karate lies not in victory or defeat, but in the perfection of the characters of its participants"

At NSK we are dedicated to the practice and promulgation of true Karate. Our objective is to give students a means of developing character while being strengthened both physically and mentally. What can a student expect when they start at NSK? Hard Training! Students willing to commit to training at NSK will be rewarded with strong Karate skills.